Home Blog What Can You Do with a Zoo Science degree?: Career Opportunities

For many people, working in a zoo or an aquarium is a dream job. Caring for and training animals is both philanthropic and fulfilling. It also allows a person to educate others in critical subjects such as conservation and biodiversity. If you love animals, an animal science, Aquarium, and Zoo Science degree may be the perfect fit.

A degree in Aquarium and Zoo Science from an accredited school such as West Liberty University offers a wealth of opportunities to graduates.

Below, we will explore many of those opportunities and break down relevant information to consider about colleges and future employment.

West Liberty University Zoo Science majors engage with animals from all over the world. That’s part of the learning process students should expect.

A Zoo Science student should explore and engage with animals in West Liberty’s animal care labs, that often host exotic reptiles, such as snakes and iguanas. Students will find themselves standing in close proximity to large and or exotic animals that most other people will never be near. For many Zoo Science students, these intimate encounters often lead to animals depending on the student as a caretaker.

For coursework, students should expect classes to center around animal care, ecology, and conservation. But coursework supports hands-on experiences that teach students to care for animals, including the creation of specialized diets or environments that foster reproduction.

Simply stated, Zoo Science students work intimately with animals and reptiles. The learning experience centers around real experiences, chaperoned by some of Zoology’s most accomplished professors and doctors.

Aquarium and Zoo Science Degree Jobs – What You’ll Do 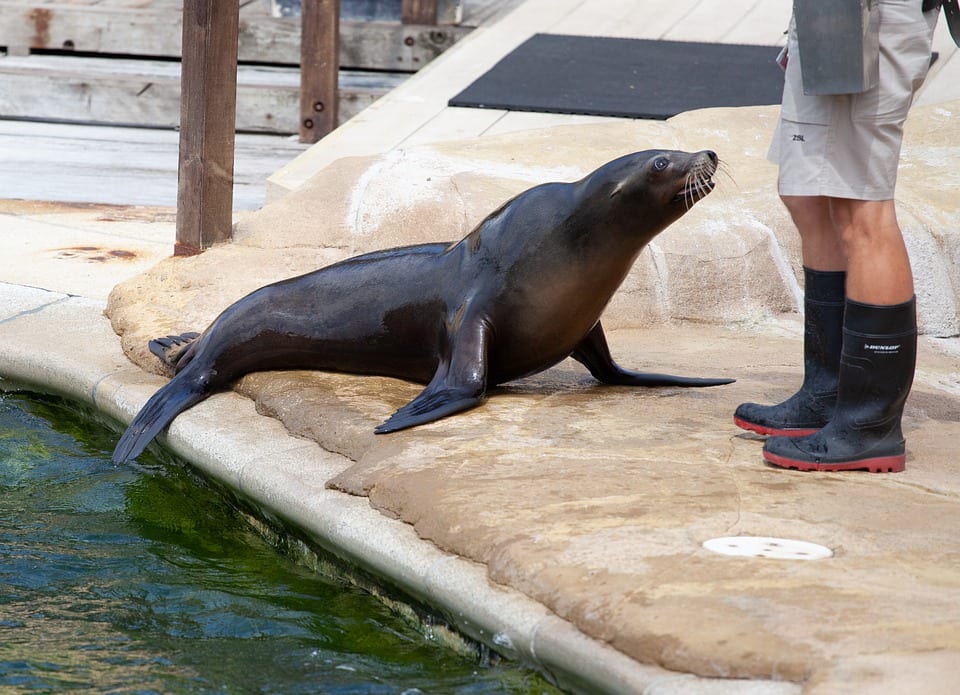 Whether you’re looking for a career in a zoo, aquarium, fish hatchery, or conservation center, jobs for Zoo Science graduates remain plentiful and abound.

Animal trainers typically care for animals on a daily basis and help them change their behavior patterns for a number of reasons. By way of consistent training modules, animal trainers deploy human signals to prompt an animal’s changed behavior.

According to USA Today, animal trainers can make up to $57K per year. We might assume these to be animal trainers working directly with zoos as opposed to general animal trainer jobs which require no formal education. Animal trainers employed by a zoo with a formal Zoo Science degree bring tremendous value to the bargaining table. Additionally, animal training for horses, or for military or law enforcement animals, requires a Zoo Science major’s aptitude and experience to manage. There is a wide range of exotic animal caretaking opportunities, depending on which a Zoo Science graduate chooses, the salary potential can vary. One of the better-paying zoo science opportunities resides in exotic animal rescue, which according to Simply Hired, averages a salary of $72K per year.

Beyond that, exotic animal care research offers Zoo Science grads the opportunity to promote biodiversity change all over the world.

People who choose to pursue an Aquarium and Zoo Science degree often do so because they care about conservation agendas.

When an animal’s habitat becomes compromised, whether that be through human or natural means, a conservation biologist is tasked with problem-solving and creating a strategy to combat the negative impacts. \

In 2018, the U.S. Bureau of Labor Statistics determined a conservation biologist’s median salary to be just over $60k per year. \ In order to sustain farms and wild animal life, animal reproductive health must be considered the highest priority.

There are a lot of environmental factors that serve to obstruct animal reproductive health. It’s the role of the reproductive physiologists to understand what those issues are and to solve them.

According to Zip Recruiter, reproductive physiologists can pull in over $96k annually.

Often referred to as animal scientists, Zoo Science graduates who fill this role may work closely with farm or zoo animal diets. Major universities, as well as food companies, employ animal nutritionists for a variety of reasons. In some cases, an animal nutritionist might help rehabilitate animals.

According to the U.S. Bureau of Labor Statistics, many animal nutritionists earn $113,430 per year at the top level.

An Aquarium and Zoo Science degree help students who love working with animals find exotic, high-earning careers all over the world. These careers tend to associate themselves with improving our world’s animal conservation. This, in turn, can help our world’s ecosystem thrive.

Aquarium and Zoo Science degree jobs such as zoo educator and zoo professionals are plentiful and in demand. These fulfilling careers are sought after, making your education program of choice an important decision.

Click the links to learn more about the only Master’s Program in the United States for Zoo Science, or to discover more about our Bachelor’s Degree in Zoo Science program.

Mr. Vincent Sirianni is our Graduate Programs Coordinator. He has a Masters in American Studies from the University of Wyoming and a Bachelors in History from Wheeling Jesuit University. Prior to providing support for all of our current Master's degree programs, he served in various admissions-related positions at WJU.